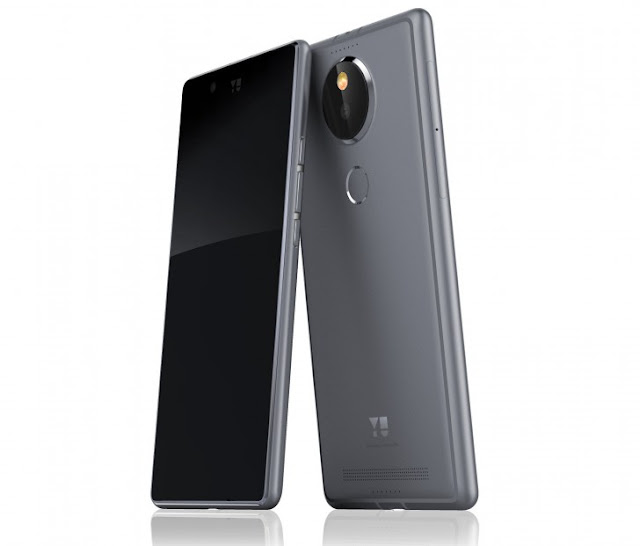 The YU Yutopia features a uni-body aluminum design.
Display: Yutopia has a 2K 5.2-inch QHD IPS LCD display. The display features a color gamut covering 91% of the NTSC spectrum and a contrast ratio of 1000:1.
Performance: Yutopia runs on a Qualcomm Snapdragon 810 based on a 64bit architecture powered by Adreno 430 GPU, with 4GB of RAM and 32GB storage with microSD expansion.
Camera: There is a 21MP Sony Exmor RS IMX230 Sensor on the back which can record 4K videos. The camera has OIS(Optical Image Stabilization) with Phase Detection Autofocus. On the front is a 8MP.
Battery: YU Yutopia is powered by a 3,000mAh non-removable battery. The phone supports Qualcomm QuickCharge 2.0 for fast charging.
Fingerprint Sensor: Yutopia has a Fingerprint sensor on the rear, same as position as on Nexus 6P. The fingerprint sensor can not only be used for security purpose, but also for clicking selfies directly using the Fingerprint Sensor.
Software End: Talking about the software end, the phone runs on Cyanogen OS 12.1, which is on top of Android 5.1 Lollipop, with promised Marshmallow update too.
Audio Output: Yutopia has DTS audio support and comes with Little Birds Earphones from the House of Marley out of the box. Customers will get a six month subscription for the music streaming service Gaana.
Around YU: Yutopia is featured with a new service called Around YU, which integrates multiple services in collaboration with companies like Zomato, Scandid, Ixigo, Easy Cabs, Ola Cabs, and Taxi for Sure  This app will integrate the services all the services into one single app so the customers can find everything in one place without having to install their individual apps.
The YU Yutopia is available at Rs 24,999 ($376) and will be available exclusively on Amazon India just like the other YU Phones. Pre-bookings have started today and the phone will go on sale from December 26 later this month.
Some Pictures clicked from Yutopia
Check Out: House Of Marley Smile Jamaica Review