The budget tablet market in India was pretty bad, with one or the other tablet having flaw in some or the other segment be it performance or battery or display, but Mi Pad sets another level of benchmark for budget category tablets. Be it design, display or performance it outperforms each and every tablet in its price segment and even competes well with the lineup of mini tablets from the king of tablet makers, Apple.
And the best part, the tablet is available in open sale across various online portals including MI India’s own website which is good considering the concept of flash sales which was followed by Xiaomi earlier was quite irritating and cumbersome for many including me.
It’s priced at 10,999 INR.
Read on to find the detail of each and every aspect about the tablet.
BEOFRE THAT JUST A QUICK GLANCE AT THE SPECS

IN THE BOX CONTENTS 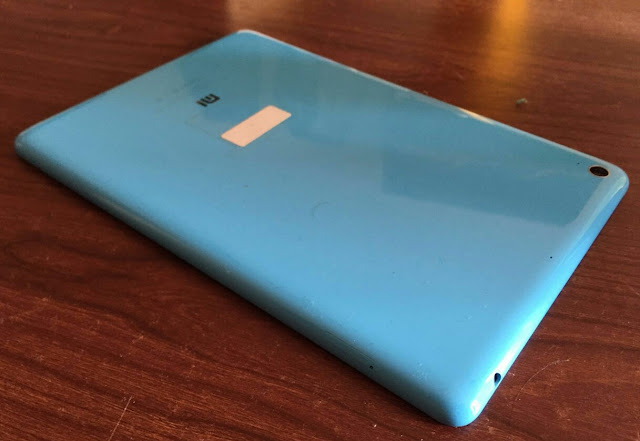 The best way to describe mi pad’s design would be stretched iPhone 5c till it became the size of iPad Mini. It shares almost the same dimensions of that of iPad mini and the back feels like that of iPhone 5c. As per Xiaomi it has used magnesium alloy in the construction of the Mi Pad, but you wouldn’t know just by looking at it. The back is non removable and the battery is sealed in. Now the technicalities, the dimension are 202 x 135.4 x 8.5 mm (7.95 x 5.33 x 0.33 in) and it weighs 360g
It has volume keys on the right side, below that it has the power/lock button which are tactile enough. The left side houses a microSD card slot with support upto 128GB. The top has the 3.5mm headphone jack and the micro usb port is at the bottom.
The front has the 3 capacitive buttons which glows when in use. There is rear camera and microphone in the upper left corner of the back, and two speaker grilles at the bottom.
The back is somewhat glossy and does register fingerprints and takes scratches, but don’t worry these scratches would only be visible when viewed under perfect angle so noting much to worry there.

This is the most appealing aspect of Mi Pad. One can’t believe the hardware it offers at the price point. This is one of the device which reached consumers and uses NVidia’s Tegra K1 SoC another being the Google nexus 9 which had an NVidia tegra k1 Denver SoC.
It features NVidia’s 32 bit Tegra K1 which was revealed in 2014, which gained too much of noise because of its benchmarks and performance and its GPU. It has four ARM cortex A15 cores running at 2.2GHz and a fifth low-power “companion core” that comes into picture to let the main cores go to sleep when power needs to be conserved.
Now here comes the interesting part, Tegra k1 SoC uses the same Kepler GPU architecture used in next-gen PC gaming. It is approximately 1.5 times more energy efficient than other mobile GPUs and fully supports OpenGL 4.4, OpenGL ES 3.1 and tessellation. It has 192-core Kepler GPU which makes gaming on Mi Pad almost flawless and is theoretically on par with today’s most basic entry level graphics cards.
The SoC is supported by 2GB LPDDR3 RAM. This model has 16GB of eMMC flash storage, and you can add up to 128GB more using a microSD card. You get Wi-Fi b/g/n/ac and Bluetooth 4.0, but no GPS. There is no version of this tablet with cellular data capability or voice calling. One interesting part that the tab also supports OTG so I tried connecting my external HDD to it and guess what it even supported that.
There’s a 4:3 LCD screen measuring 7.9 inches diagonally and has a resolution of 1536×2048 , which is exactly the same as the second and third-generations of iPad mini’s, but there are a lot of bezels in the side which makes it appear a little big. It also houses the MI logo on the top left corner with the light sensor and front camera being beside it.
There is an 8MP back camera out there but there isn’t a flash and a 5MP front shooter. The battery capacity is an impressive 6700mAh. 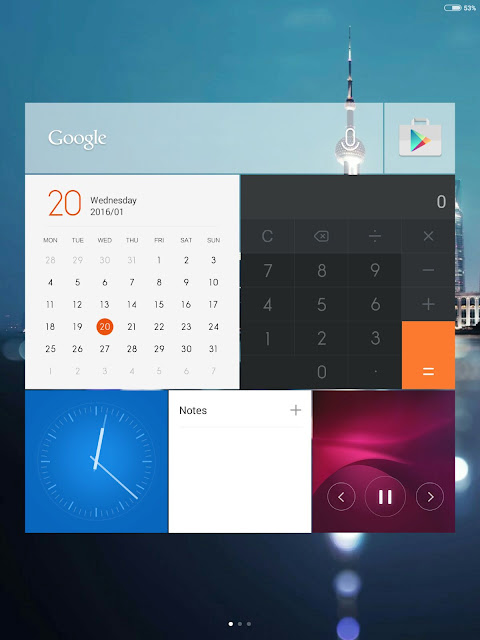 When you get the device it runs on MIUI 6 based of Kitkat 4.4.4 but it can be updated to Xiaomi’s latest MIUI 7 which brings along a bunch of new features but the android version stays on Kitkat only.
You all know about the amount of customization MIUI offers , but the MIUI on this tablet doesn’t feature the themes app so you can’t customize the looks as per your choice , also the security app which conatined a varitey of apps like data manager, virus scanner, permissions manager is also missing in the tablet version of MIUI.
All the apps are on the home screen with multiple screen to accommodate all the apps just like iOS. There is a dedicated home screen for widgets which contains Google search bar , a basic calculator where you can perform some quick calculations , a calendar , clock , music player and you can add many more and arrange them as per your needs.

With such a massive hardware it was expected to perform like a beast and even lives up to the expectation. All the games that we played on it ran flawlessly without breaking a sweat. The games included Injustice-Gods among us, dead trigger 2, Asphalt 8 and even a PC title i.e. Half-life 2 , which is a Tegra exclusive game and it ran without any lags thanks to the 192 NVidia Kepler GPU cores. Also the apps loadup time are also quick and you wont feel any lag on the device doing your day to day tasks to intensive works. Editing docs, sheets is also very handy on this tablet using any office app like WPS Office which is a free software. Since it has OTG support also, you can easily plug in a controller with supported games.
But the downside was multitasking isn’t that great on the mi pad because of the heavy ram hungry software i.e. MIUI. Background apps restart after opening 5-6 apps and again switching back to the first opened app. But this doesn’t kill the game considering its other aspects and you can always install third party OS like Remix OS whose tutorial will also be up very soon.
Now some benchmark scores to give you a rough idea about performance:-
However the upper rear of the Mi Pad does gets a bit hot while intensive gaming. 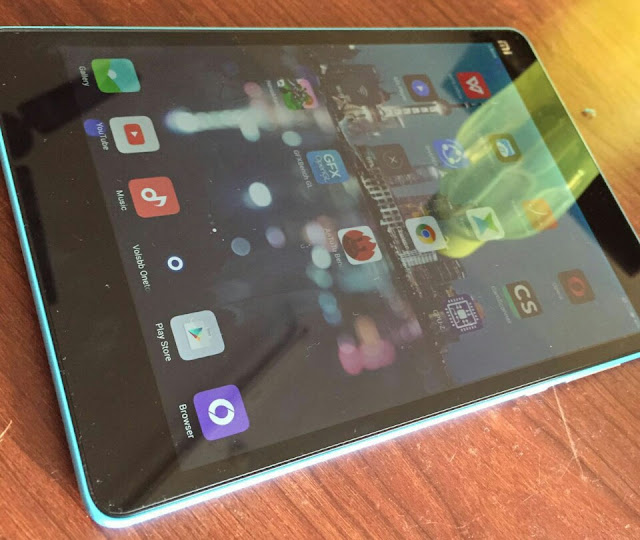 One of the main reasons of buying this tablet would be its amazing display according to me. The display is a pure eye candy with IPS LCD capacitive touchscreen and 16M colors. The resolution of 1536×2048 makes it utterly sharp for a tablet and places it in the league of iPad mini 2‘s retina display. It has a 7.9 inches display (~69.8% screen-to-body ratio).
Reading, watching movies, playing games will be utter joy on this tablet thanks to the amazing display, but since it has a 4:3 aspect ratio, we get black screen on the bottom and up while watching videos on it.

Another thing about the screen is that its a bit reflective and this creates a bit of problem when viewing under direct sunlight and also it gets fingerprint marks easily and thus it needs to be wiped off with a cloth frequently. It has Corning gorilla glass 3 protection which protects it against scratches.

It has a 6700 mAh battery which is pretty decent for a tablet this resourceful and does a pretty god job. It easily lasts throughout the day with gaming and casual stuff with still juice left in it. Such a wonderful battery life on this device at such an affordable price makes it even more worth. 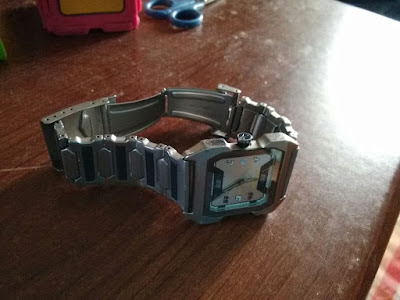 There isn’t much to talk about this, it’s a decent shooter to capture some of your moments but it isn’t one of the best. Similar to the front camera its 5MP and is decent enough. The default camera app also is pretty straight forward with basic features like tap to focus, variety of filters to apply from. The front cam has a beauty mode to make selifes look good.

So once again Xiaomi gives us a device which is completely terrific at the price. It’s not a perfect device has its own flaws like lack of 3g/4g cellular version which might be a deal breaker for many but considering the price in my opinion you can’t ask for more.
It’s a great value for money device, for your everyday tasks to heavy graphics intensive gaming along with a stellar display to enable reading, watching more immersive and I would definitely recommend it to anyone looking for a budget tablet and are okay with the things which this tablet lack as mentioned above.

You can buy the Xiaomi Mi Pad from the following links:-