Details about the new Whatsapp crash

On the Web client, Whatsapp allows upto 65500-6600 characters.But after typing about 4200-4400 smiley’s, the browser starts to lag. But since the limit is not yet reached, Whatsapp allows us to go on inserting more characters. Whatsapp web crashes while we type and send. In whatsapp mobile app, when it receives the message and overflows the buffer crashes. 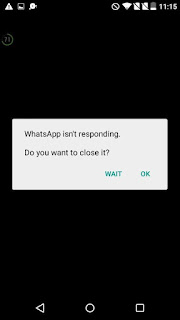 The above exploit is already tested out in:

PC Browsers: Chrome, Firefox
Android: Moto E(Gen:1), Asus Zenfone 2 Laser, OnePlus Two.
In iPhone, it fails to crash but it freezes the app for few seconds
According to stats, there are more than 1billion Whatsapp users on Android. The new exploit keeps these 1 billion users on a risk.

How to recover if you’re attacked?

Technically, there’s only one way to recover your whatsapp.
The method will erase your whatsapp chat with the attacker but your Whatsapp will work normally!

Just go on to the Chats section, Press and Hold the chat with attacker and delete your conversation.

0 thoughts on “Whatsapp Bug:Crashes in PC Browser and Mobile App”