The NVIDIA GTX 1080 is out and boy hasn’t it been an interminable wait! The hype has settled down as well with the much awaited release and the benchmarks and reviews so far reflect that the GTX 1080 has left no stone unturned in furnishing the best performance of the lot. NVIDIA GTX 1080 is also the first consumer class Pascal based GPU and flaunts to be a gaming powerhouse. NVIDIA has made some noteworthy changes with the memory system and the GPU architecture itself.

The NVIDIA GTX 1080 at its core is supposed to be the successor to the GTX 980 but NVIDIA claims that the GPU is faster than the Titan X which speaks for it potential. What astonishes me is the fact that if NVIDIA has a faster GPU in-stored what is its price going to be? The 1080 will retail at a price of $600 for the standard and $700 for the founders edition. That leads us to intuiting the price of a 1080 Ti to be somewhere around $900-$1000 which will be a serious price hike despite the performance increments.

Nonetheless, the all new GTX 1080 from NVIDIA is a true monster and could well make us all oblivious of the price hike with its jaw-dropping performance. But is it really what NVIDIA promised? Is it really what the enthusiasts foresaw it to be? We’ll get to that soon but first, lets dive into some hardware specifications. 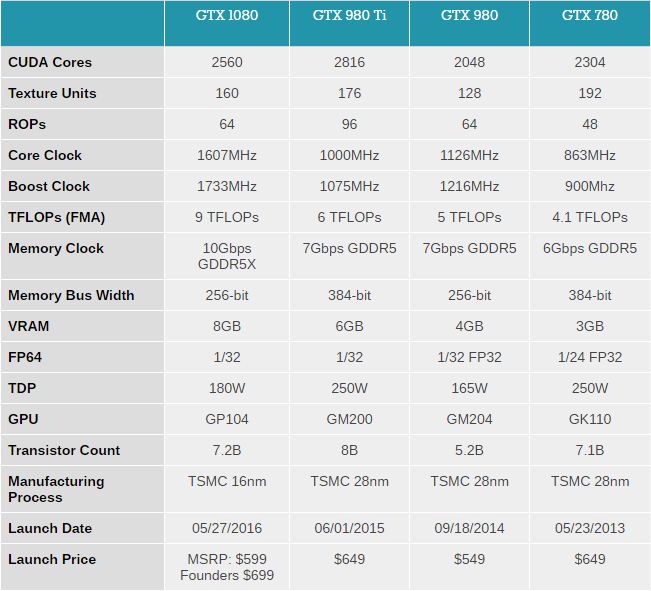 As you can observe from the table above, its patent that NVIDIA has made some colossal changes, most notably the Manufacturing Process and the Memory system which has been replaced by GDDR5X instead of the traditional GDDR5. The node size has been shrunk by a mammoth 12nm which brings its own benefits such as reduced temperatures, reduced TDP and a higher overclocking threshold.

The GP104 is the second GPU from the Pascal lineup so far. The first being the Tesla P100 (GP100), a professional Pascal counterpart for servers and HPC. In comparison to the die size of the P100 which is 610 mm², the GP104 appears minuscule with its die size sitting at 314 mm². The GPU core, has a lot in common with its predecessor Maxwell at the block level with 4 Graphics Processing clusters (GPCs) consisting of a collection of Streaming Multiprocessors (SMs), 64 Raster Operation Pipelines (ROPs) and 2 MB of L2 cache. A critical difference this time around being that nVidia has screwed in two extra SMs amounting to 5 SMs inside each GPC. Each SM containing 128 CUDA Cores and 8 TMUs which equals 2560 CUDA Cores and 160 Texture Units on a whole combined with 48 KB of L1 cache.

Each SM is paired with a PolyMorph engine which handles  vertex fetch, tessellation, viewport transformation, vertex attribute setup, and perspective correction. The GP104 PolyMorph Engine also includes a new Simultaneous Multi-Projection unit which renders the scene with upto 16 viewpoints eliminating defects such as warping in multi monitor setups. We won’t go into the detail of the technology but its sufficient to know the advantages of SMPs.

Another crucial highlight is the all new GDDR5X memory system by Micron. The memory sports patent advantages such as a bandwidth of 320 GB/s over the 224 GB/s of its predecessor, the NVIDIA GTX 980 owing to its humongous 8 GB of GDDR5X memory clocked at a blinding 10 GHz on a 256 bit wide bus. NVIDIA has also ameliorated the Delta Colour compression by topping it up at 8:1 / 4:1 in comparison to Maxwell’s ceiling of 2:1. The technique helps the GPU in reducing the byte fetch by instructing the GPU whether a delta of pixels in the image being rendered is too small for utilizing the entire bandwidth, equating to an additional 20% effective bandwidth.


Is this the Pinnacle of a new generation?

In my opinion, no it is not. Every generation of new GPUs is expected to have a performance bump of 20-25% over its predecessor and the GTX 1080 is no different. Their were pompous and rhetorical headlines a few months ago such as Pascal offering 10X the performance of Maxwell GPUs (Yes, we could assume that nVidia was enunciating this with reference to deep learning but they never wiped the flaunts they littered) which deteriorated to 2X relative VR performance and 1.5X relative gaming performance during the official unveil. A substantial fall, and a mind-boggling one at that.

So, in all honesty, the GTX 1080, at least to me doesn’t appear like the awe-inspiring, ground breaking or revolutionary GPU. Its just another in the countless line of nVidia GPUs. Although, I’ve always believed criticism where necessary and appreciation where due, without taking away the slightest bit of applause that nVidia deserves for furnishing us with yet another Kingpin of the PC industry, let us be grateful to these pioneers.

Many were hoping for NVIDIA to solve their Async Compute impotence after they were mercilessly obliterated by AMD in the DX12 benchmarks that surfaced with Ashes of The Singularity and Hitman which were the only two notable DX12 games which utilized Async Shading, something which might relieve nVidia supporters.

It was believed that Pascal would finally rectify the Async Shading incapability owing to which every NVIDIA GPU suffered greatly in running DX12 games especially Hitman and AoTs where even a 390x vanquished the beast of a card that the 980 Ti is. But looks like, no efforts have been made to eradicate the trouble that the nV cards suffered because of the lack of an analog scheduler for faster context switching among compute threads, the vital reason behind why NVIDIA lagged behind in spite of possessing a greater number of Async Compute cores.

NVIDIA, apparently has shifted the locus from Async Shading to a technique called Pre-emption which prioritizes tasks such as Compute over other Graphic or data copy threads. A smart move but not an astute one, definitely not one which could fix all the trouble that NVIDIA has been toiling through. They are using an improved version of it called Pixel level Pre-Emption but the contrast is not a considerable one. In fact, in the long run Pre-emption could end up stalling the GPU pipeline in case of a data dependency conflict or time spanning compute tasks which is certainly not something you’d want to happen while running a game. So, for now it remains that NVIDIA will stick to Pre-emption with hopes to screw in an analog scheduler in the Volta lineup. This could however induce a tremendous recoil which nV might not be able to suppress when AMD’s Polaris or Vega line up hits the market. AMD had earlier played a gamble and integrated Async Shaders with a fully capable analog scheduler which has paid profusely for them in the long run and hence, we can be positive about the fact that AMD will hold nothing back in pulverizing NVIDIA with an ace up its sleeve.

The NVIDIA GTX 1080 is certainly an exceptional gaming powerhouse and is the current King of the Hill as far as gaming is concerned. Yes, there are a few shortcomings that everyone expected nVidia to sort out but there’s no other way short of something ludicrous that you could ignore the sensational performance that the card boasts of. Summarizing it all, here are the :-

The price is a pretty displeasing one considering its only the successor to the NVIDIA 980 and still costs $600-$700. This leaves ample room for nVidia to hike the price further on a 1080 Ti or a Pascal Titan, something which fans like us will be reasonably irked with. If AMD comes along with a Polaris / Vega GPU which could challenge the throne of the fastest gaming GPU on the planet, expect it to be a lot cheaper and that could well be an obnoxious blow to NVIDIA.